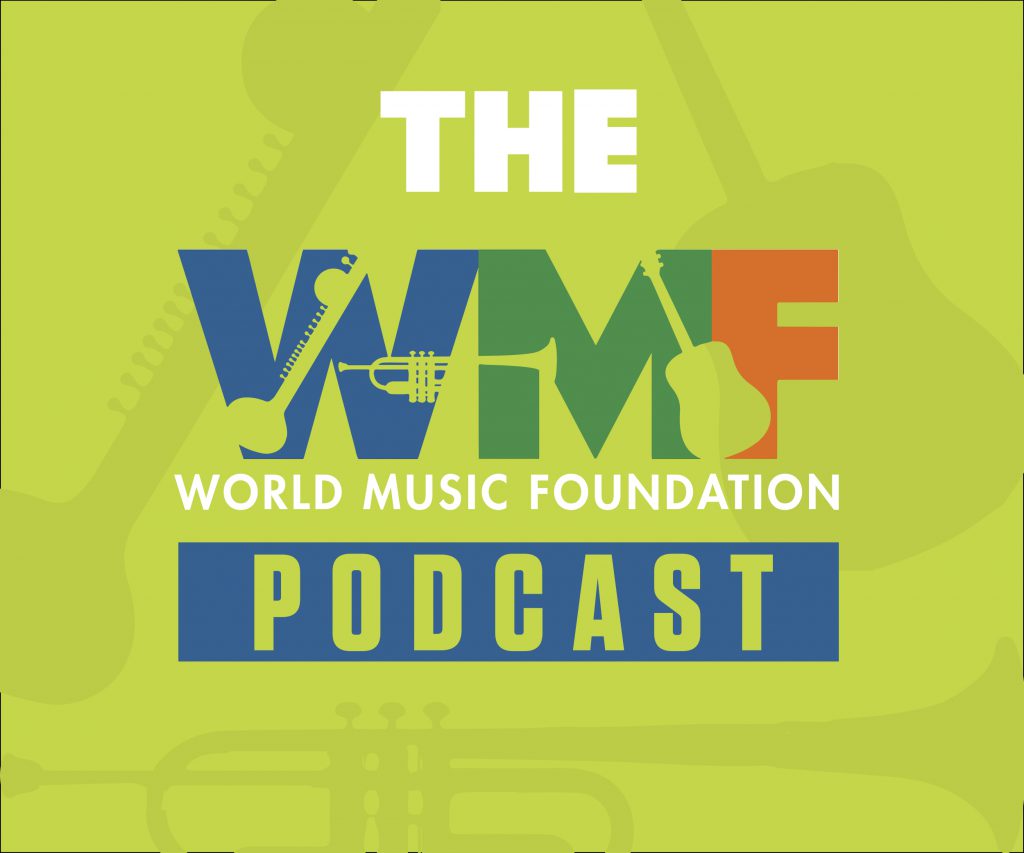 A podcast that explores the beauty and connectedness of musical cultures from every part of the globe.

American rapper and prolific creator, Che “Rhymefest” Smith to discuss Hip-Hop, his upcoming album, and Hollywood acting debut, along with topics ranging from Chicago’s youth, spirituality, various life changing trips around the world, and much more. Rhymefest’s upcoming album is titled Love Lessons Part 1, and as you’ll hear in this conversation, Love is a topic at front of mind right now for Che. This episode also includes the world-premier of an amazing track from the upcoming album, featuring Black Thought (aka Tariq Trotter of The Roots) & Raheem DeVaughn. Rhymefest has won multiple Grammys, a Golden Globe, and an Academy Award, but as he says: that stuff you can just Google; in this conversation he goes much deeper.

Wu Fei describes herself as an ancient soul trapped in a feisty woman’s body. Hailing from Beijing, China, Wu Fei is a multi-talented musician and composer known for playing and improvising on the traditional Chinese guzheng as well as improvisational singing and piano. Fei talks to John about her life as a child prodigy, transitioning from China to the U.S., how both countries have influenced her and her music, and what it was like to hear American music for the first time in her teenage years. She also discusses her critically acclaimed original work “Hello Gold Mountain.”

This week’s episode takes us to Nashville, TN, USA where John visits Weirdo Workshop, the music label and creative headquarters for our guests, Louis York, to speak with them about their new album and everything that’s brought them to this point in their careers. Louis York is the powerful duo and creation of multi-GRAMMY nominated songwriting and production team, Claude Kelly and Chuck Harmony. Kelly, a 4x Grammy Award nominee, and Harmony, a 3x Grammy Award nominee and 2011 NAACP Image Award winner, both together and apart have written and produced hits for a long list of multi-platinum recording artists including Rihanna, Bruno Mars, Miley Cyrus, and Whitney Houston to name a few. Their debut album is titled American Griots and it’s a sonic adventure that’s deserving of their incredible backstory.

Visit Full Episode Page
Self-proclaimed “crazy, romantic musician”, Roberto Fonseca, speaks with John about his recently released 9th solo album, Yesun, along with the life experiences and musical training that have brought him to this point in his musical journey. Roberto is a GRAMMY nominated, Cuban pianist, multi-instrumentalist, composer, producer and bandleader, and on this album he experiments with a wide range of musical forms, from jazz and classical music to rap, funk, reggaeton and electronic music. Roberto also talks about his tenure with the Buena Vista Social Club and how traveling the world with these masters of traditional Cuban music forever changed his approach to music making.

Visit Full Episode Page
As a renowned Afrobeat and Jazz musician with four GRAMMY nominations, Femi Kuti is well-respected around the world for opening minds through the power of his music. John spoke with Femi from the Shrine in Lagos, Nigeria, where he shared the details of his musical upbringing and the importance of different music cultures. He also gets into his life-changing transition from the Saxophone to the Trumpet and the effect this has had on his music and his thoughts. Femi is the son of Afrobeat pioneer Fela Kuti, and is considered a torch-bearer to his father’s legacy, but in this interview Femi explains why he believes that his mother, Remilekun Taylor, is actually 90% responsible for who he is.

Visit Full Episode Page
John travels down to Coldwater, MS for the 69th Annual Goat Picnic in honor of fife & drum legend, Otha Turner. What started off as something else, ends up being a a good handful of great conversations with musicians (and even some audience members) about the Hill Country Music of North Mississippi, USA.

Visit Full Episode Page
Praised for her dynamic, passionate conducting style, Taiwanese-American conductor Mei-Ann Chen is acclaimed for infusing orchestras with energy, enthusiasm and high-level music-making, galvanizing audiences and communities alike. In our conversation we follow her musical evolution from shy violin player in her birth country, Taiwan, to dynamic, trailblazing, internationally sought-after conductor. Mei-Ann also shares the inspirational interaction with Martin Luther King that inspired the creation of the MacArthur Award-winning, Chicago Sinfonietta, the nations most diverse orchestra, of which she is the principle conductor and music director.

Visit Full Episode Page
Last week, we spoke with Brian & Leila Pertl, and members of the Music Education Team, who have helped design the Mile of Music Festival, especially the cultural education components. This week, we’re speaking with the teaching-musicians themselves to learn about Afro-Cuban Drumming, Mariachi, Ghanaian Drumming, and Native American Flute. We attended a few sessions ourselves during the festival and spoke with these artists afterwards.

Visit Full Episode Page
We were delighted to discover the Mile Of Music Festival, which curates international music workshops alongside concerts of Americana and Folk music. Several of the Americana acts were imported nationwide and even internationally, but all of the international music is taught by people from within their small Appleton community. So which music is ‘local’?? We attended this 3 day festival, attended the workshops and spoke with the organizers to fully understand the blurring of this dichotomy.

Visit Full Episode Page
Jess Sah Bi & Peter One, musicians from Côte d’Ivoire in West Africa, recall hearing the harmonies and guitars of Simon and Garfunkel and Cat Stevens for the first time and how that impacted their music from that point onward. In our conversation they take us through the creation of their landmark African-Country-Folk inspired album Our Garden Needs Its Flowers from their initial search for a producer to now the recent reissue, 30 years later, by Awesome Tapes From Africa.

Visit Full Episode Page
Pamyua’s musical footprint, spanning two decades and several countries, is a testament to the ongoing vibrancy of Inuit music, the group members, and their unique heritage. Brothers Phillip and Stephen Blanchett speak from the heart on issues of identity, culture and music expressed through Pamyua (pronounced bum-yo-ah) with collaborators Ossie Kairaiuak and Karina Moeller. They are preservers of an amazing musical tradition that is still alive but has historically been marked for extinction and continues, to this day, to face the threat of becoming lost.

Visit Full Episode Page
Chicago’s own Zeshan B’s fearlessness as an individual translates into music that knows no boundaries and takes from a wider range of influences than we may be used to hearing in one musician’s discography. In 2017 he released Vetted, his debut album, to critical acclaim. He made his national TV debut that same year on The Late Show With Stephen Colbert. Since then he’s been touring and preparing for his next release. We talk about his experience in music education, his current project, and how we all share an inherent hunger for groovy music.

Visit Full Episode Page
Originally from Costa Rica and Iran respectively, Jorge Strunz and Ardeshir Farah have brought the musical influences of their native lands into their highly virtuosic, rhythmic, and improvisation-rich original instrumental compositions, inspiring fans and many guitarists worldwide. Their meeting in 1979 in Los Angeles, where they are still based, marked the first time that Latin American and Middle Eastern music, along with other important elements, came together on the guitar. Our conversation touches on all of these points and more. Enjoy!

Visit Full Episode Page
Aashish Khan is the eldest exponent of an Indian Classical music lineage that reaches all the way back to the court of Mughal emperor Akbar the Great. He takes us back to the creation of his pioneering Indo-Jazz fusion band, Shanti, in the early 1970s, he shares about his new project Shringar, and reveals that he has a literal treasure trove of unreleased recordings, including a track that he recorded with George Harrison, Eric Clapton and others.

Visit Full Episode Page
Thomas Brooman has always had a vision of a smaller musical world — from his early years spent among fellow awe-struck concertgoers during the European Rock & Roll boom, to his later work cultivating a collective of artists as co-founder of the globally inspired World of Music Arts and Dance festival (WOMAD). We talk about the relationship between musicians and international markets, and get a behind-the-scenes look into his involvement in the creation of the term ‘World Music’- in all of its complexities.

Visit Full Episode Page
Our second episode brings us to a small town in the Northern part of the U.S. where we, surprisingly, find a deep Blues history. We follow Paramount Records through the peak of success, recording landmark artists that changed Western popular music forever, but this music, at several times, was almost lost forever. We follow the thin thread of events and recent efforts that have gone into preserving this important musical history.

Visit Full Episode Page
Dave Pietro’s curiosity and workmanship have been the foundation of his decade’s long career as an internationally touring Jazz musician. He explains the value of truly listening— even if what you’re hearing confuses or frightens you at first. We touch on his gigging history starting in New York, his new album New Road: Iowa Memoirs, and how immersing oneself in a culture can fundamentally change your understanding of pretty much everything.

And For The Extra Curious: